A computer was something on TV
From a science fiction show of note
A window was something you hated to clean
And ram was the cousin of a goat.

Meg was the name of my girlfriend
And gig was a job for the nights
Now they all mean different things
And that really mega bites.

An application was for employment
A program was a TV show
A curser used profanity
A keyboard was a piano.

Memory was something that you lost with age
A CD was a bank account
And if you had a 3 inch floppy
You hoped nobody found out.

Log on was adding wood to the fire
Hard drive was a long trip on the road
A mouse pad was where a mouse lived
And a back up happened to your commode.

I guess I’ll stick to my pad and paper
And the memory in my head
I hear nobody’s been killed in a computer crash
But when it happens, they’ll wish they were dead.

– Posted using BlogPress from my iPad 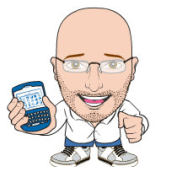 Paulino Rocha e Silva, Brazilian, 45 years old, lawyer and network consultant. Graded in law course and computer system by Pontifícia Universidade Católica do Paraná and Colégio Santa Cruz, in Curitiba, Paraná State, Brazil. His specialty is digital security in legal and technical aspects. Certified by Beckman Center for Internet & Society at Harvard Law Scholl and by SANS (System Administrators and Network Security). Former president of ABDTI (Associação Brasileira de Direito e T.I.). Runs projects at Directnet, a company inside the FGV-PR incubator, where are developed integrated solutions of public utility. Some of those solutions could be seen at http://www.neoplace.com.br or at http://www.cellpark.com.br. Follow me at http://www.twitter.com/paulrs. Contact information: http://findmeon.com/user/paulrsilva or at http://paulrsilva.myplaxo.com .